While the name Fire Apparatus Manufacturers’ Association (FAMA) might imply the membership is limited to fire truck builders, a majority of the membership consists of companies who make the wide variety of components that are attached to the firetrucks. All the major fire pump manufacturers are members, and we participate significantly in FAMA’s work with National Fire Protection Association (NFPA) technical committees. In this article, we will describe recent changes in pump testing and how they impact fire apparatus performance.

NFPA 1901, Standard for Automotive Fire Apparatus (2009 ed.), required the pump manufacturer to perform and provide certification for a 500-pound-per-square-inch (psi) gauge pressure hydrostatic test of the pump body. The standard also separately required that the entire intake and discharge piping system be capable of withstanding a hydrostatic gauge pressure of 500 psi. Tank-to-pump and tank-fill lines were excluded from this requirement on the tank side of valves in those lines. The “Apparatus Pump System Certification” section of the 2009 edition required pumping tests to be carried out at 100, 70, and 50 percent of rated capacity. Depending on the capacity rating, the highest net pump pressure of these tests was either 200- or 250-psi gauge pressure. The manufacturer’s predelivery test also required a piping hydrostatic test at a gauge pressure of 250 psi.

The 2016 edition also includes new pressure capability requirements for plumbing that address the MDPC rating of the pump. The new requirements separately address the discharge piping system, the aerial waterway and master stream waterway, and the intake piping system. The entire discharge piping system, including valves, drain cocks, and outlet closures, is required to withstand a hydrodynamic discharge pressure of 500 psi or 100 psi over the MDPC rating, whichever is greater. Excluded from these requirements are tank-fill lines on the tank side of the valve and compressed-air foam system (CAFS) piping and components that include valves that permit isolation from the discharge pressure.

The requirements of the manufacturer’s predelivery test section of the standard were also changed to include a hydrodynamic test in addition to the 250-psi hydrostatic test of the pump and its connected piping system. The hydrodynamic test is required to be conducted by subjecting the pump and its connecting piping system to the prescribed MDPC rating of the pump or the maximum pump close-off pressure, whichever is less, with the test pressure maintained for three minutes. The maximum pump close-off pressure is defined in NFPA 1901 as the maximum pump discharge pressure obtained with all discharge outlets closed, with the pump primed and running, with the pump drive engine operating at maximum obtainable speed, and with the pump intake pressure at atmospheric pressure or less. The standard identifies which valves and outlets are to be closed or capped. A bypass valve or discharge valve is permitted to be opened as necessary to maintain pump temperature during the test.

The 2016 edition changes ensure that the pump will be tested to the highest permissible pressure that it can produce. This begins with the pump manufacturer testing the pump to 500 psi static pressure. This is done using an external pressure source without the pump running. Then if the MDPC of the pump is greater than 500 psi, the pump must be operated for five minutes at its MDPC. The pump manufacturer must certify these tests.

The pump and engine in an apparatus combined generate the actual pressure that a pump will produce. The apparatus manufacturer must therefore ensure that the pump and engine combination in each apparatus does not cause the pump to exceed its MDPC and that the plumbing exposed to this pressure will hold up. This starts with a static pressure test at 250 psi. Then the pump is operated in the apparatus to the highest pressure it can produce, making sure that this pressure does not exceed the MDPC. This test is set up so that those lines and valves that can see maximum pressure will be exposed to it for a minimum of three minutes.

NFPA 1901 and NFPA 1906, Standard for Wildland Fire Apparatus (2016 ed.), both include a new chapter for ultra-high-pressure (UHP) fire pumps that introduces new tests specifically for UHP fire pumps. UHP pumps are defined as having a pump discharge pressure of 1,100 psi or greater. The pump manufacturer is required to provide certification of pump performance for the rated capacity and discharge pressure and net positive suction head required (NPSHR) and certification of completion of either a hydrostatic test or hydrodynamic test at 1.4 times the rated discharge pressure of the pump. The new chapter also requires apparatus pump system testing and certification by the manufacturer. The tests include a 30-minute pumping test at rated capacity at rated pump discharge pressure and a water tank-to-pump flow test. In addition, if the pumping system is equipped with a priming system, a priming system test is performed. Also, if powered by the chassis engine, an engine speed advancement interlock test is performed. The manufacturer’s predelivery tests include a piping integrity test that involves both a hydrostatic and hydrodynamic test and a water tank capacity test.

All of the changes and additions to NFPA 1901 were developed through the NFPA standards revision process and included public inputs and public comments that were considered by the Fire Department Apparatus Committee and its Pump Task Group. FAMA member company representatives worked diligently with this committee to promote apparatus requirements that are safe, practical, and effective. We will continue to do so in the future. 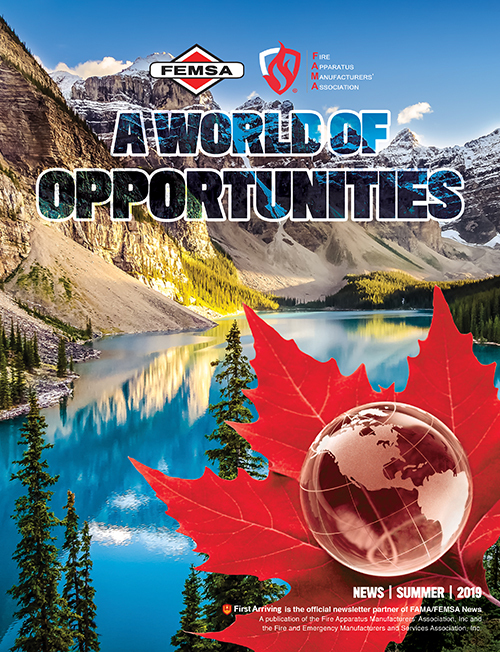