In the fire service, there exists a split between a traditionally younger, more tech-friendly group of firefighters who readily adopt modern electronics and change and an old-guard group who may be more resistant. Neither one is right or wrong, but the impact of this split is that some people may not have a real appreciation for one of the hidden killers of modern electronics and thus may not be able to make educated choices about the products that are particularly well-suited for use on their emergency vehicles. This hidden killer is TEMPERATURE.

The interior of a modern emergency vehicle often more closely resembles a scene from a techy science fiction movie than a passenger vehicle because of all the screens and electronic devices that are installed in it. These electronic components have revolutionized the way firefighters respond to incidents and the types of data first responders have access to while on scene, thereby increasing apparatus and crew efficiency while decreasing the need for excess staffing.

All modern electronic devices have one thing in common: each of them has been engineered with its own kind of system to shed heat and reduce the operating temperature as the device consumes power. Laptops and power-hungry radios have fans, cell phones have vent ports, and scene lights have heat sinks. Paying attention to thermal (heat) management allows emergency responders to optimize the performance of their technology for a much longer time than if they were to choose devices and mounting locations without considering the impact that temperature would have on performance.

Laptops slow down as they get hot. They become less stable, and the processors are less efficient as the temperature rises. Many laptops and portable computers are equipped with variable speed fans that blow across the motherboard to keep temperature under control.

Consider this: When computer systems get too hot, they can be programmed to shut down to prevent damage to internal components. This is great for preserving the technology, but it is not desirable while using the device in the middle of an incident. When choosing a mounting location for a laptop, consider mounting the device in an area with nearby airflow and as far out of direct sunlight as possible. When charging, try not to set the computer on or cover it with any bunker gear or other items in the cab.

EFFECTS ON HEADLIGHTS OR OTHER SEALED ELECTRONIC DEVICES:

For the last 40 years, the only choice for fire apparatus headlights has been a “sealed-beam” halogen fixture that was not particularly effective or configurable. As many firefighters have learned in hazmat class, a sealed enclosure subjected to heat will experience an increase in internal pressure as the gas inside expands. Similarly, the inverse applies to a hot sealed enclosure when it is rapidly cooled. Fire apparatus headlights are simply pressurized vessels that are subjected to frequent and extreme temperature and pressure changes.

With modern advances in semiconductor and LED technology, LED headlights have become the new normal. But as a number of firefighters have noticed, many fire apparatus with modern LED headlights seem to consistently have problems with water and condensation. Many of the headlight manufacturers have differing opinions on the acceptability of such accumulation, but the science behind the phenomenon remains the same nonetheless.

Consider this: Most fire apparatus headlights are actually just carryovers from the trucking market and are used for simplicity because of the relatively high cost to produce unique assemblies for the relativity low volume of fire trucks manufactured yearly compared with the commercial truck market. These trucking headlights are designed to be cooled by active airflow when a vehicle is driven down the highway. Fire apparatus, on the other hand, are often driven very short distances then stopped on scene and pumped while not moving down the roadway. Therefore, fire apparatus headlights are often subjected to much higher operating temperatures and pressures over the life of the vehicles than over-the-road tractor trailers with the same exact headlight assemblies.

Older style sealed-beam headlights were manufactured almost entirely out of glass. The glass was either formed or blown into a mold, and the pieces of glass melted and “sealed” together. Because there were no gaskets within the enclosure, the headlight could easily handle the changes in pressure and temperature and rarely saw failures that were unique to fire service applications.

Modern LED headlights, on the other hand, are manufactured from dissimilar materials like aluminum housings, glass, or plastic lenses. They are often sealed with a glue-type material or a gasket, and that gasket has a very important job to do when the temperature and pressure change rapidly. If the headlights are totally sealed, the rapid and repeated increase and decrease in pressure that is unique to the fire service is likely to cause excessive pressure on those gasketed interfaces, which are more likely to fail over time.

When internal pressure vents on a fire scene, and the fire apparatus is returned to quarters, the water used to wash the apparatus—and headlights—rapidly reduces the equalized internal pressure of a vented headlight assembly. This, in turn, causes now moisture-laden atmospheric air to enter the housing using the same pathway the pressure forced its way out of while the truck was on scene. The combination of increased temperature and higher operating pressure makes failures more frequent in fire apparatus headlights than in the same headlights used in the automotive trucking market.

So, how do the committees who determine fire apparatus specifications evaluate options and choose a headlight that is properly designed for fire service applications?

When evaluating the options, work with apparatus or headlight manufacturers to look for a headlight with a “vented enclosure.” Many of the reputable headlight manufacturers in the United States work with companies that make valves and membranes that allow the housing pressure to equalize as it heats up without allowing moisture to pass through the membrane. There are a variety of styles and methods available to vent headlight housings. Some headlight manufacturers use an open hole with a cap. Others use an adhesive-backed moisture-blocking membrane, and some others use a valve assembly that contains a moisture-blocking material. Each of these methods has its merits—from cost savings to high performance—and each with its own price tag. 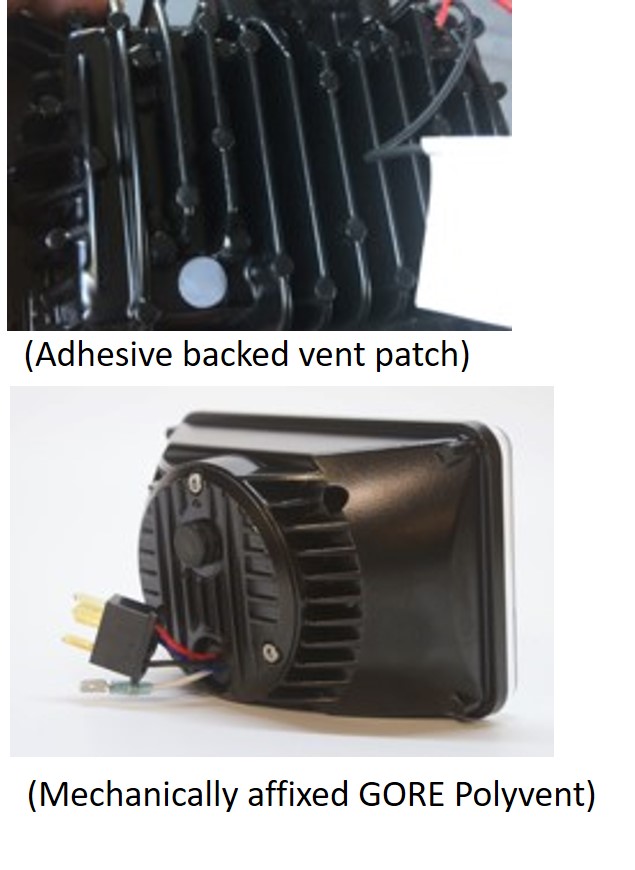 LED scene lights are also particularly sensitive to temperature. LEDs produce less light when they are heated. When scene lights get too hot, the light output can fall by as much as 40 percent.

This phenomenon is much the same as friction loss in a fire hose where the option (when there is too much friction) is either to turn the pump up, increase the diameter of the hose, or bring the nozzle back to level ground to maintain water flow. With scene lights, the electrical options are to either turn the drivers up, reduce the temperature, or put a larger heat sink on the back of the light to maintain light output. Without doing so, the “friction loss” in the circuit will result in a reduction in performance.

When choosing modern scene lights, firefighters often gravitate toward thin or lightweight LED fixtures because they are easier to carry, easier to manipulate, and easier to raise on poles/tripods. However, it is important to weigh the risk-reward of fixture size and weight when picking fire apparatus tools. Thicker fixtures and fixtures that draw less power typically operate at a lower temperature than thin fixtures, which can get extremely hot or draw more power. The lower the temperature, the more effective the tool is in the long term.

To ensure maximum performance, request thermal degradation data from the light manufacturer before specifying the component for use on your apparatus.

Or, consider this test which can be done in the fire station:

Take a light fixture, plug it in to a known power source, put a light meter on the ground at a preset distance from the fixture and write down the measurements every five minutes for an hour. After one hour, if the number has stopped dropping, the fixture is what is known as “thermally saturated,” and the percentage of reduction in output can be calculated. The number on the meter is less important, but the percentage difference from the highest to the lowest is what’s important.

All fixtures will have some degree of degradation—20 to 25 percent is normal. Anything higher than that indicates a problem with thermal management, which will ultimately reduce the lifespan of the circuit and cause unpredictable light levels when on a fire scene. 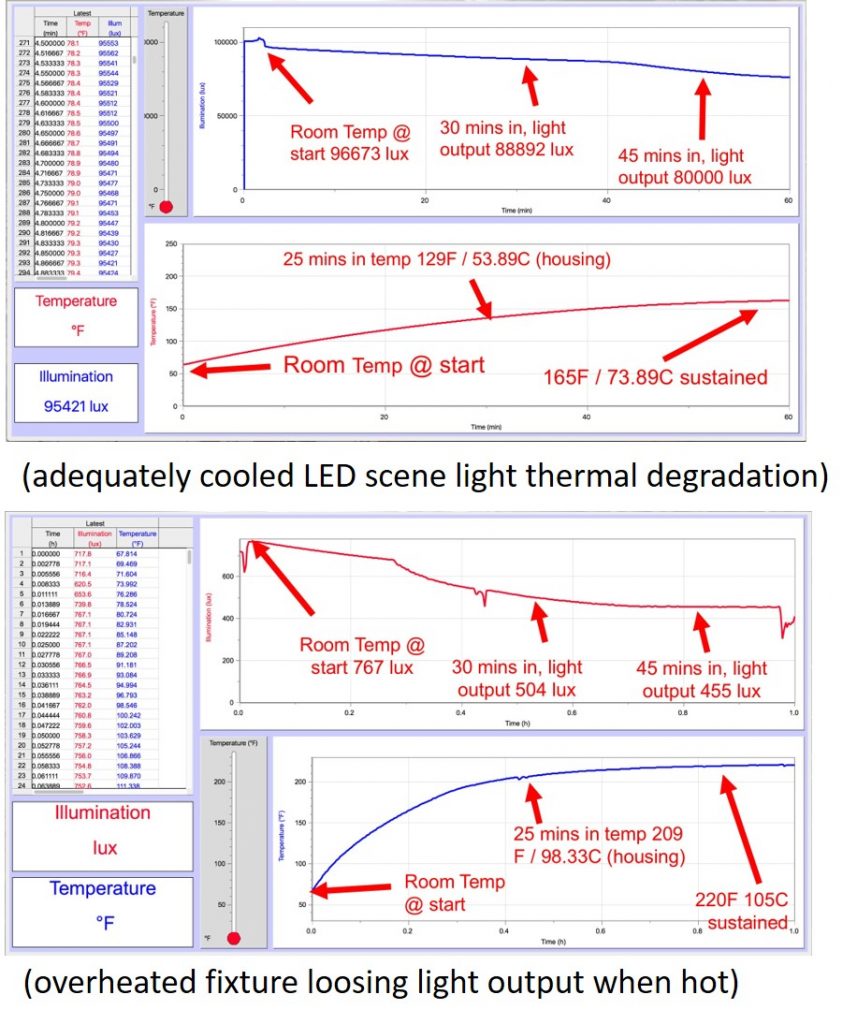 Many FAMA member companies build products specifically for the fire apparatus industry. When designing an apparatus, listen to the recommendations for the apparatus or component manufacturer as they relate to temperature and cooling. The effect of circuit temperature is greater than some people might expect and can have a profound effect on both the performance and the reliability of an apparatus as a whole. 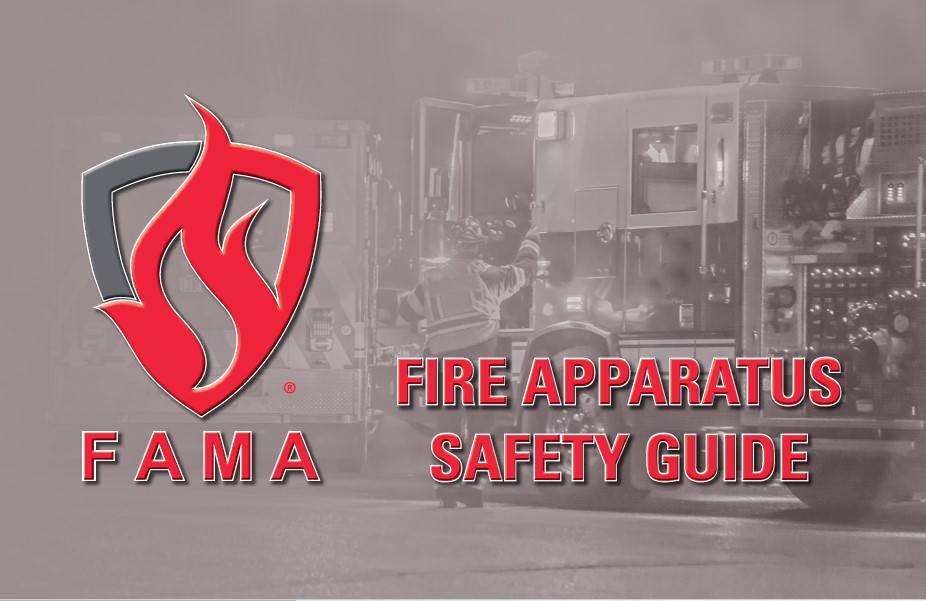